Daniel and Alexander – Their journey to diagnosis

It took us 16 years to learn our children’s correct diagnosis. Observing mine and other kids throughout many years, I came to believe that my sons’ delays were not all I’ve been told; there was something else standing between my kids and their ability to become what they want to be.

Daniel was born in 1994 as a beautiful, perfect, and healthy baby. When he was three years old, we accepted that he was somewhat behind other kids. It was nothing that we could not handle at that time, because he would soon catch up, as we were told. We had a great support at school, community and private therapists. Daniel worked very hard to become a normal kid despite his diagnosis of autism spectrum disorder (PDD-NOS). We started noticing the same problems with Alexander when he was a little over one year old. From that moment on, we knew that our boys did not have just allergies, infections, low muscle tone, diarrhea, short attention span, etc. It was something else that was taking our kids life away from them, and taking them from us. We started the search for the answers!

Finally, three years ago, we gave ourselves gene-sequencing tests for Christmas presents. Six months later, we got the same tests for the boys. 300-page report did not give us answers we were looking for, but the company provided raw genetic data as part of the results.

I couldn’t find anybody that would help me with interpreting raw data. Finally, I decided to write the mathematical code to analyze the results. Finally, the secret to our boy’s issues and nearly two decades of suffering was revealed. I really wanted not to believe the results and was hoping I made a mistake. Within a few months, doctors performed AGU blood and urine test and confirmed the diagnosis.

When we finally learned the correct diagnosis in 2012, it devastated us. Both of our children have Aspartylglucosaminuria (AGU). During sixteen years spent looking for an answer, we never had a doubt that when we found it, we could cure our boys and give them a chance for a normal life. Unfortunately, when finally we knew the problem, we could not help them because no cure is available for this and many other rare diseases! 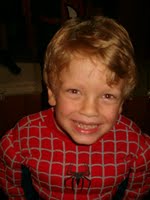 The inspiration came from Alexander, our intuitive little Spiderman. One day he said: “Mommy, don’t cry. Let’s watch a movie!“. Of course it was a Spiderman movie, the one that ends with the phrase: “With great power comes great responsibility.” After the movie, Alexander asked me: “Why responsibility comes with power?” At that instant I knew the answer! Because I have the power of knowing what is wrong with my kids, now I have a great responsibility for these two human beings and all the others to find the cure!

Aspartylglucosaminuria (AGU) is a rare genetic disease that slows down child development in the primary/middle school. It belongs to the group of rare diseases known as lysosomal storage disorders. There are just over 300 children and young adults around the world that have this rare genetic trait that makes them the nicest, honest, most helpful and the sweetest people ever. It also slowly takes their lives away at the same time. The disease has been first described in 1960s, and is very well documented since then with one thing left to do: FIND the CURE!!!

This is where our real journey begins! September 2012, we learned that most of the research efforts around the world have stopped due to lack of funding and no work is currently conducted to develop a cure for AGU.

Equipped with the knowledge of the problem and no other place to go, we decided to work on a solution and save kids’ lives! We interviewed many researchers and discussed the ideas about the development of AGU treatment. In December of 2012, we started a project with University of North Carolina to develop a treatment for AGU and to help our kids and other patients around the world. Currently, the treatment is in the pre-clinical studies.

It is a gene therapy based treatment approach. The studies are in the different stages of development. Based on the background data and preliminary results, our intentions are to start clinical trials within a few years. For more information, please visit http://www.raretrait.com