Mucolipidosis II alpha/beta (also known as I-Cell Disease) is a progressively debilitating disorder that affects many parts of the body and is caused by mutations in the GNPTAB gene. This gene provides instructions for making part of an enzyme called GlcNAc-1-phosphotransferase. Mutations in the GNPTAB gene that cause mucolipidosis II alpha/beta prevent the production of any functional GlcNAc-1-phosphotransferase

At birth, children with mucolipidosis II alpha/beta are small and have weak muscle tone (hypotonia) and a weak cry. Affected individuals grow slowly after birth and usually stop growing during the second year of life. Development is delayed, particularly the development of speech and motor skills such as sitting and standing.

Children with mucolipidosis II alpha/beta typically have several bone abnormalities, many of which are present at birth. Affected individuals may have an abnormally rounded upper back (kyphosis), feet that are abnormally rotated (clubfeet), dislocated hips, unusually shaped long bones, and short hands and fingers. People with this condition also have joint deformities (contractures) that significantly affect mobility. Most children with mucolipidosis II alpha/beta do not develop the ability to walk independently. Affected individuals have dysostosis multiplex, which refers to multiple skeletal abnormalities seen on x-ray.

Other features of mucolipidosis II alpha/beta include a soft out-pouching around the belly-button (umbilical hernia) or lower abdomen (inguinal hernia), heart valve abnormalities, distinctive-looking facial features that are described as “coarse,” and overgrowth of the gums (gingival hypertrophy). Vocal cords can stiffen, resulting in a hoarse voice. The airway is narrow, which can contribute to prolonged or recurrent respiratory infections. Affected individuals may also have recurrent ear infections, which can lead to hearing loss.

Feeding and Nutrition in children with ML II alpha/beta suggestions for feeding a child with I-Cell Disease – A family experience.

There are a number of MPS Societies around the world who also support Mucolipidosis. 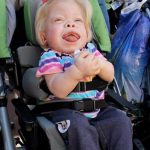 Madison’s mum April has put together a video in tribute to her beautiful daughter and is thrilled to be able to share it with other families.