Our Logo – Why Penguins?

ISMRD believes penguins symbolize both the important bond of family, especially between parent and child, and the belief that the impossible can be overcome. To understand the nature of penguins in real life is to understand the correlation to ISMRD, its values and the depth of the bond within families affected by a Glycoprotein Storage Disease.

Penguins are flightless birds that reside entirely in the Southern Hemisphere, primarily in the cooler subtemperate climate north of the Antarctic. Penguins have adapted over time to flightlessness by evolving their bodies to a form that has enabled them to become masters of the ocean. Their great advantage is found in their “wings,” or flippers, which allow them to create thrust that propells them forward through the water. On average, a penguin can achieve submerged speeds of 4 to 8 km per hour, or about 2 to 4 knots per hour. And though they may appear very clumsy on land, they are, in fact, able to walk faster at shorter distances than a human and are, in fact, quite agile! Emperor penguin mates share completely in raising their young ones, called chicks, and have one of the most unusual breeding strategies of all birds. Breeding is usually done in colonies that are as far as 200 km or 120 miles inland. After the egg has been laid by the mother, the father incubates the egg between his feet and the folds of his belly. The mother will then go out to the ocean for up to two months to fish and feed, while the father stays back to maintain the incubation process. During this time, the father penguin will not eat, while huddled together in large masses to withstand the severe temperatures (up to -60 celcius/-140 farenheit) and preserve body heat. After hatching, the mother returns and relieves the father of duty, so that he can travel the enormous distance back to sea to finally feed.

Like penguins in real life, our penguins show great adaptability to their harsh environment, manifested in the diseases that have afflicted their children. ISMRD’s penguins are learning to symbolically fly and overcome the disadvantages of genetics and the clinical symptoms that have ensued. Our penguins will eventually “fly” by finding treatments and cures for these diseases and, in the meantime, will find ways to support one another across nations and differences in language. 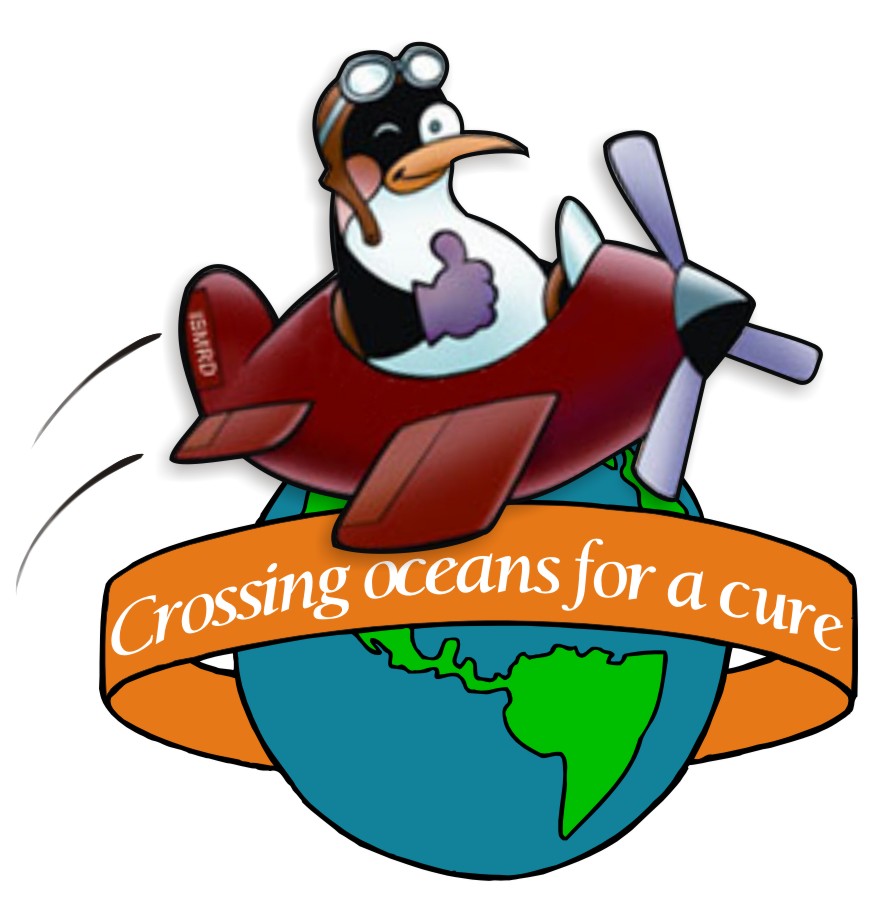 ISMRD’s logos (the penguin family on our home page, our worker penguins explaining storage in Lysosomal Diseases and our plucky pilot penguin who pops here and there) were created specifically for ISMRD and copyrighted by Denis Rodier of Rodier Studio in L’Annonciation, Quebec Canada and went through a redesign in 2007 when ISMRD added the slogan “Crossing Oceans for a Cure”. This slogan and logo is used on conference and any publicity materials. Any unauthorized reproduction of these images is forbidden without the express written consent of ISMRD. However, we do hope you enjoy them and that they convey the sense of familial pride we feel for our children and families!
We use cookies on our website to give you the most relevant experience by remembering your preferences and repeat visits. By clicking “Accept”, you consent to the use of ALL the cookies.
Do not sell my personal information.
Reject All Cookie Settings Accept
Manage cookie consent